I used to read The New York Times online. Granted, the NYT can be weirdly insular, mesmerized by the trappings of wealth, and bad at covering literature, but I like newspapers, I like plenty of the NYT‘s national and international coverage, and I live in New York.

Over the last year, I’ve found myself doing almost all of my carefully limited news consumption on my phone. It’s the kind of reading I can do while sardined into an uptown 6 train during rush or standing in the eternal line at Trader Joe’s, and it doesn’t intrude on the precious blocks of uninterrupted reading time I try to spend on other things. And there’s an NYT app for the iPhone, so…great, right?

Good Is Better Than Early

The NYT’s iPhone app was released in July of 2008. After 18 months of frequent updates that often failed to fix the app’s glitches, crashes, glacial download times, tendency to fail to download content for offline reading, and increasingly intrusive ads, I’ve given it up. The last time it successfully launched on my phone was in December, and when updating my phone again and updating the app didn’t fix the problem, I declined to start over (again) with a fresh install and just deleted it.

I now read news on my phone via the Guardian‘s iPhone app, which was released in December 2009, and the difference is like walking out of a stuffy cubicle lit by flickering fluorescents and into a bright spring afternoon. The Guardian app is beautifully designed for readers and includes intuitive and useful ways to discover and read related content, as well as a fully customizable menu of content; fast, configurable, and reliable offline reading features; a useful search feature,  and glorious photography sized for my phone. It even has great audio content. 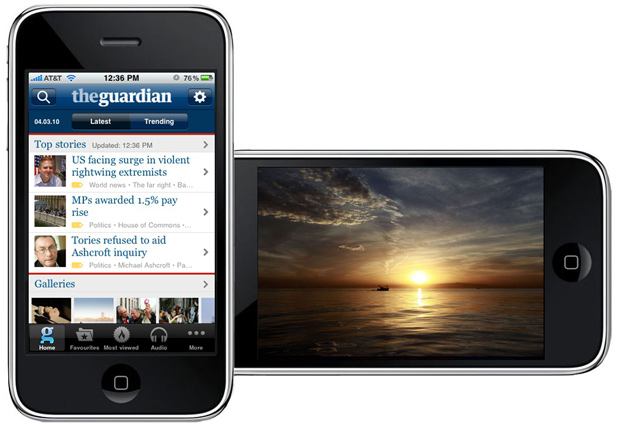 The NYT app is free. The Guardian app costs $2.99 in the US and £2.39 in the UK. One of these applications wastes my time and often disappoints me; the other is fast and transparently easy to use, and it doesn’t leave me with a “This article was not downloaded” message while I’m squished between a sweating shouty person and a tissueless sneezer on the train and am desperate for a mental escape.

It’s an easy choice, and I hope the Guardian makes a lot of money. But the part that media leaders should be thinking about is that I now read the Guardian, rather than the NYT, at my desktop computer, and I’m probably not alone in that. (Granted, this ad campaign alone makes me want never to visit the NYT site again.)

Oh, and the third app. That would be the iPhone application released this week by The Washington Post, which is the other national US newspaper I tend to read. It costs $1.99 and apparently snuffs itself after a year, so you have to re-purchase it. This last fact is only visible if you click a “read more” link in the iTunes store and go to the very end of the list of features.

I’ll happily pay twice as much as the Post is charging if I get a great app in return, but the annual re-download nonsense suggests bad things about the Post‘s notion of good practices for online publication; it’s too similar to Amazon’s incredibly creepy ability to snatch back content from your Kindle if they decide to do so. More importantly, it’s so buggy, crashy, crippled, and generally lousy that the paper’s own tech columnist gave it a terrible review.

The Guardian seems to have learned something from the last ten years of the web, and its app radiates confidence in and goodwill toward its readership. The NYT and Post, on the other hand, are clinging to the idea that putting revenue first and readers (a very distant) second will lead to long-term profits. I still have a soft spot for the NYT, but were I investing in media companies, I know where I’d be putting my money.