There are still a lot of elbows being thrown in the squabble about “creation” versus “curation,” and it seems to be getting worse. As humans tend to do, we’re talking past each other and pretending to simplicity in the face of the complex and the weird. Here’s what I think is going on. I think we’re getting tripped up by two things: clumsy language and a misapprehension about competition for limited resources.

Earlier this spring, two well-known bloggers—Maria Popova of Brainpickings and Tina Roth-Eisenberg of Swissmiss—introduced the Curator’s Code, a proposed convention for attributing credit to bloggers and other link-finders. The initial discussion that followed mostly skipped over rational critique and went straight for sneering and overheated bluster: it was, apparently, intolerable cheek for these “self-proclaimed curators” to want their efforts as digital gravediggers to be recognized when others passed their work along. (Interestingly, comments from journalists whose work is likely to be actually “curated” by bloggers, like The Atlantic’s Megan Garber and the NYT’s David Carr, were far more measured than those that sprang from the jumpy heart of the web design world.) It was all a bit discouraging, but also seemed to be over by mid-April.

Alas, it seems not. Last Friday, Jonathan Harris—a sweet internet hippie who makes lovely things—had a quote from a talk tweeted out of context, as tweets from talks inevitably are:

“Curation is replacing creation as a mode of self-expression.” – Jonathan Harris @jjhnumber27 #creativemornings

And that sent The Awl’s Choire Sicha—who is not a hippie—into a snarkfest about faux-curators and their cultural climbing. (For the record, Harris was apparently suggesting that this “replacement” of creation by curation was something he wanted to combat, not to celebrate.)

“Curation” Is Still a Stupid Term

“Curation” strikes a lot of people as a weird, inaccurate thing to call the selection/connection/display activities made possible by the internet. (I wrote a gigantic thing about that awhile back—tl;dr is that we’re stuck with the term, and that maybe we should work toward the traditional senses of curation by becoming better caretakers of the content we “curate.”)

It’s probably so difficult to find a word for the practice because it’s quite difficult to isolate the underlying impulse from just…being human. This stuff we do on Pinterest and Pinboard and Polyvore and (some) blogs is much less like “editing” or “curating” and much more like the casual forms of taste display that we participate in when we get dressed in the morning, create mix tapes, collect art, buy and arrange furniture, collect books or records, and banter with clerks in one of the world’s three remaining video shops.

The hilarious thing about the “know your place and respect your elders” screeds—there are many, and I’m not going to link to them—besides the fact that they make those of us who write them sound ancient, is that they don’t even read to the people doing the “curation.” Serial pinners aren’t fighting for cultural credibility by using terms like “curation.” They just need a term. Popova herself doesn’t like the word.

If I were more awesome, I’d go back in time and suggest an alternate word like “blogger” that is just palatable enough to come into mainstream use. But I’m stuck here like everyone else, so I’m going to just tell you that in my own house, and in conversations with my friends, I don’t say “curator” without hand-flapping airquotes. I say “bowerbird.”

If you haven’t seen David Attenborough’s glorious series The Life of Birds, you’re missing out on something really wonderful. In one segment, he introduces the Australian bowerbird, which is notable for the extraordinary display of found materials it creates in order to seduce a mate.

So for now, I’m going to just say “bowerbirds” instead of “content curators” so that I can talk about the practice instead of the title. (I’m not suggesting that everyone switch to this term—y’all can fight about the language somewhere else.)

When taste-display happened only offline, it didn’t really threaten anyone—except the geniuses at the RIAA, who think mixtapes are deadly and would happily sneak charge you royalties on earworms if they possibly could.

Online, it’s different. For one thing, we’re still utterly baffled by the meaning of “copies,” so when something gets pinned or blogged, some of us feel cheated or robbed. But also, those of us doing this taste-display stuff are winning more positive attention than we did even a few years ago. And some of us are saying really reasonable things like “this is a form of creative self-expression” while others are saying essentially (but probably forgivably) adolescent things like “this is more important that the things you call ‘creation.'”

The reason this behavior is getting more attention is the abundance of digital stuff. It’s suddenly a lot more important to have help with the process of figuring out what to look at, which means bowerbirds and other filters are gaining cultural capital. This is troubling some people tremendously, perhaps because they see it as a threat to “creators” or to “ownership.” The value of hard-working discovery-centric blogs like Brainpickings or Boing Boing or BibliOdyssey is actually quite clear-cut: they’re created by our librarians, our culture-scouts, and often our unofficial scholars. And instead of working for salaries, they work in an economy of attention. Credit to the discoverers often funds more discovery work, even as credit to creators funds more creating. More than that, it encourages a higher standard of commentary and a more ambitious approach to collection, by channeling attention back upstream to the most skillful bowerbirds and bloggers.

But the real sticking points in the creator-bowerbird tensions are about ownership and money. 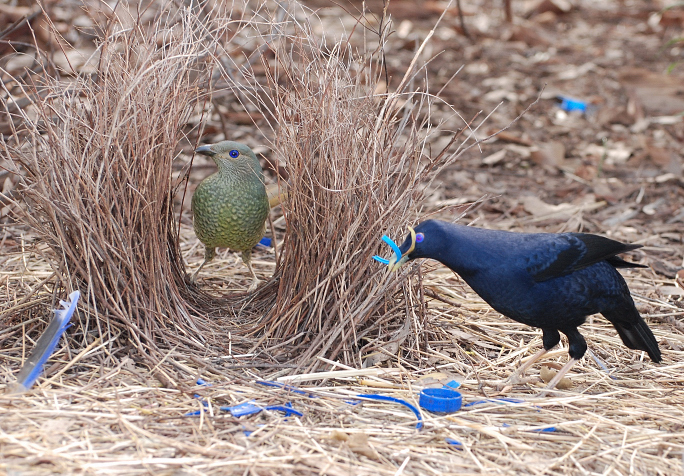 Look, darling, I made you a blog.
(Image via a now-perished GBWF link.)

Because of the vicissitudes of online ads, which appear only on the “official” view of a piece of web content, some of us are attempting to cast new sharing and archiving tools as “theft”—not of the content, exactly, but of the value to be derived from ad impressions.

Those taking this position face a dilemma: either they can attempt to put technological barriers between their content and people who want to collect and display it (by, for example, putting their content on a block-list managed by the above services) or they can attempt to discourage these uses by claiming legal or moral high ground. Doing the former certainly alienates some readers. Doing the latter is unlikely to change anyone’s behavior.

Sharing and Archiving as Theft

Some content creators—anecdotally, mostly independent artists and writers—consider any “use” of their content that they haven’t expressly permitted to be forbidden, whether or not the technology of their chosen transmission medium allows it. Usually that means that viewing a piece of content in its original digital context on a website is OK, but everything else is “theft”: using reading applications, “pinning”/reblogging a photo, or even excerpting the work in service of sending it traffic is, under this framework, both morally and legally wrong. (Doesn’t matter if there’s a link to the original, it’s theft because it involves making a copy. Never mind that every time you view an image on the web, you’re making a local “copy.” That’s different!)

I don’t really have anything to say to this group about morals, but the legal argument is worth a caution: fair use is a swamp of ambiguity, and while we do have case law saying that it’s illegal to reproduce an entire work on a website, we don’t have anything like clarity about the legality of, for example, using a small image from a photo collection in a post about the collection, or excerpting an article at length. Unless you’ve just time-traveled back from the future, after all this stuff has been written into law, claiming that any of the above things are “clearly illegal” has no more weight than name-calling. Without actual legal analysis or case law behind it, a statement of illegality is just rhetorical posturing, so we’re on firmer ground if we stick to rational ethical and economic discussions.

Slapping people down for getting above themselves is creepy. We have better things to worry about than what bowerbirds are calling themselves on the tweets. Calling any use we don’t like “theft” or “illegal” is dumb. Treating any of these complexities as though they’re obvious or simple or previously decided isn’t helping.

On the more substantive side of the conflict, there’s plenty of work to do in defining sensible standards for personal sharing and archiving. If we’re serious about changing behavior, we should be working to define symbiotic cultural norms and develop systems that respect the efforts of both creators and the people who love their work. To do that, those of us who create and publish will have to throw in with the makers of systems like Tumblr and Pinterest—and with prominent bloggers. If we do choose to whitelist our content in systems that readers love, we should explain our choices to readers. We’d also do well to be explicit about our sense of our copyright and prohibited uses: that way, if people choose to disregard them, it won’t be out of pure lack of clue.

And this is harder, but we should also accept the fact that the ground is unsteady—that whatever model we use to make money from content, right now, may dissolve within years or months as the network evolves.

The rest is pretty simple. We should stop being treating the web like it’s zero-sum and start treating each other like colleagues. When people like Popova and Roth-Eisenberg show up and offer a standard, our response should not be to freak out about them wanting in on “our” cultural capital. Respecting the work of discovery doesn’t detract from respect for the work of creators. There is not a limited supply of civility and respect, so let’s stop being dicks about this stuff.