Henry Wessells of The Endless Bookshelf quotes on his site a particularly relevant passage on the production of meaning through scholarship and storytelling:

Someone has said that a first-class museum would consist of a series of satisfactory labels with specimens attached. This saying might be rendered : “ The label is more important than the specimen. ” When I have finished reading this paper, you may admit that this is true in the case of the little museum which I have here to show : a basket, a fascicle of plant fibres, a few rudely painted sticks, some beads and feathers put together as if by children in their meaningless play, form the totality of the collection. You would scarcely pick these trifles up if you saw them lying in the gutter, yet when I have told you all I have to tell about them, I trust they may seem of greater importance, and that some among you would be as glad to possess them as I am. I might have added largely to this collection had I time to discourse about them, for I possess many more of their kind. It is not a question of things, but of time. I shall do scant justice to this little pile within an hour. An hour it will be to you, and a tiresome hour, no doubt, but you may pass it with greater patience when you learn that this hour’s monologue represents to me twelve years of hard and oft-baffled investigation.

— Washington Matthews. “Some Sacred Objects of the Navajo Rites,” Archives of the International Folklore Association I (1898); scanned version available via Google Books.

The things in question had significance to the Native American culture from which they came, but not to their new audience. In this passage, Matthews serves as a mediator and the expenditure of his time is added to the objects’ aura,[ref]As in Benjamin, not as in Erial[/ref] marking their importance and worth.

This passage pinpoints my problem with “content curation” as the term is used by bloggers: Simply holding up three or four objects—virtual or otherwise—is no more telling a story than dumping flour, sugar, and eggs onto a table is baking a cake. You have to do the work of contextualization if you want the objects to signify. 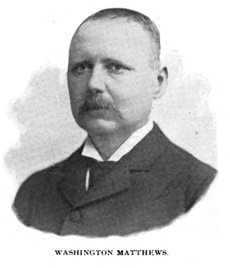 Washington Matthews, by the way, was pretty extraordinary. He was a surgeon in the US Army from the 1860s through at least 1890, and became so well known as an amateur linguist and ethnologist that the Smithsonian Institution began sending him out to collect information on Native American languages and cultural practices.

It’s hard to get one’s head around what passed for anthropological “scholarship” on indigenous cultures at the turn of century, but the fieldwork of people like Matthews did more than expand the knowledge of scholars; it was part of the process of establishing for a colonial audience the cultural sophistication and common humanity of subjugated peoples.

In 1896, at a meeting of the American Folk-Lore Society at which the great anthropologist Franz Boas also delivered a paper, Matthews singlehandedly transformed academic opinion on Navajo culture and ritual (emphasis mine):

Dr Matthews referred to Dr Leatherman’s account of the Navahoes as the one long accepted as authoritative. In it that writer has declared that they have no traditions nor poetry, and that their songs “were but a succession of grunts.” Dr. Matthews discovered that they had a multitude of legends, so numerous that he never hoped to collect them all: an elaborate religion, with symbolism and allegory, which might vie with that of the Greeks; numerous and formulated prayers and songs, not only multitudinous, but relating to all subjects, and composed for every circumstance of life. The songs are as full of poetic images and figures of speech as occur in English, and are handed down from father to son, from generation to generation.

The rhetoric is is very calculated, here. In addition to delivering a righteous smackdown to Leatherman, Matthews stakes out territory for Navajo art and culture that aligns them with that ultimate European cultural authority, the ancient Greeks. He’s making a case for the importance of his own work, of course, but he’s also positioning the Navajo as cultural elders, and he’s doing it without reference to the notion of the artless Noble Savage. Coming from a man who served during campaigns against several native tribes in the inland Northwest, that’s an awfully interesting position.

3 thoughts on “The Scholar-Curator as Storyteller”