The previous two posts in this series discussed the notion of content curation as it relates to “real-time curation” and the filtering/mosaic method of online content production. I’ll be adding on a related post with examples of what I consider to be especially useful and successful examples of that genre, but first, I want to look at another kind of content curation—one that I think is vital to the work of content strategists.

Note: If etymology isn’t your thing, just skip down to the next section, because I’m going to geek out for a minute.

Everyone Loves the OED

From Latin cura (“care”), through a tangle of mostly Old French, we inherit the English nouns “curator,” “curate,” and “cure,” as well as “accurate” and—less felicitously—“sinecure.” The OED‘s first definition for “cure”  is simply “Care, charge; spiritual charge”; from this, it’s an easy step to the care of souls performed by the curate. Long before the medieval English curate, however, Rome conferred the title “curatores” on a wide range of caretaking bureaucrats:

Under the Roman Empire, the title of curator (“caretaker”) was given to officials in charge of various departments of public works: sanitation, transportation, policing. The curatores annonae were in charge of the public supplies of oil and corn. The curatores regionum were responsible for maintaining order in the fourteen regions of Rome. And the curatores aquarum took care of the aqueducts.[ref]“The Bias of the World Curating after Szeemann & Hopps”[/ref]

To this list we may add the curatores alvei et riparum, who had the care of the navigation of the Tiber; the curatores kalendarii, who kept the account books on the investment of public funds; the curatores ludorum, who oversaw public games; and the curatores viarum, who counted among their ranks Julius Caesar, and kept the Roman roads.[ref]Dictionary of Greek and Roman antiquities. Ed. by William Smith. Illustrated by numerous engravings on wood. Smith, William, Sir, 1813-1893. Boston, [London, printed]: C. Little, and J. Brown, 1870. Digital edition here.[/ref]

In the middle ages, as English began to evolve into its modern form, the curator reappears as the spiritual caretaker of the Christian church in England. Because I am a nerd, here’s one of the two attestations from Piers Plowman that the OED uses to date the term’s entry into English:

For persones and parish prestes that shulde the peple shryue, Ben curatoures called to knowe and to hele, Alle that ben her parisshiens. (Our parish priests, whose duty it is to hear the people’s confessions, are called ‘curates’ because their business is to know their parishioners, and to cure them.)[ref]Schmidt, A. V. C. Piers Plowman: A New Translation of the B-text (Oxford World’s Classics) p. 251[/ref]

As David Levi Strauss puts it, “one could say that the split within curating—between the management and control of public works (law) and the cure of souls (faith)—was there from the beginning. Curators have always been a curious mixture of bureaucrat and priest.” It’s worth adding that while parish priests were caring for their parishioners’ souls, the inhabitants of medieval monasteries and convents were doing an impressive job of creating, collecting, and keeping safe the written records of civilization.

It’s not until the 1660s that we begin to see the word’s modern sense—which the OED has down as “The officer in charge of a museum, gallery of art, library, or the like; a keeper, custodian”—and again, we have a wonderful first attestation, from the diary of the very entertaining 17th century diarist John Evelyn:

We tried our diving-bell, or engine, in the water-dock at Deptford, in which our curator continued half an hour under water. . . .

Words cannot describe how much I enjoy the idea of that curator’s job. 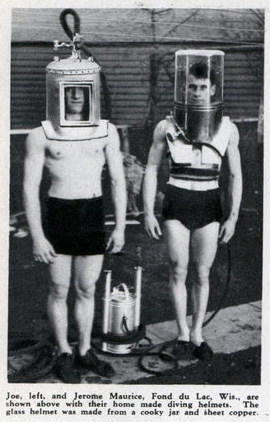 So how does this relate to the work of a content strategist? If we shove aside all the hoopla about “real-time curation” for a moment, the relationship is quite clear. Here’s Kristina Halvorson, from the Brain Traffic blog post about curation:

As content strategists, it is in fact our job to sort through the wasteland of content—both online and within the organizations we serve—to find the really valuable assets, to organize them in meaningful ways, and to ensure they’re properly cared for over time.

Another commentator focuses on the last part of that statement, noting that real curators care for, rather than about, their collections.[ref]“Am I a Content Curator? A Content Surgeon? A Quontent Physicist?”[/ref]

This distinction gets to the heart of content strategy’s strongest connection to the work of professional curators, which is that most of our work, particularly with large organizations, involves planning for the ongoing assessment, management, storage, indexing, distribution, and display of content.

In an A List Apart article from last year, content strategist Erin Scime points out some of the connections between editorial and curatorial work:

As if hanging art, the editor-as-digital-curator thoughtfully examines how to strengthen primary content (editorial features) by positioning it with related content elements to support a thesis. But it’s not just that simple. Unlike physical gallery space, the web is a far less constrained space which offers access to multiple dimensions of content at once. . . . That said, juxtaposing timely and timeless content is something that few sites do well—but with this digital curation frontier, there are essentially open skies for exploring this potential in page design and how related content is served up to users.[ref] “The Content Strategist as Digital Curator” includes some statements about the nature of curation with which I suspect many new-school gallery and museum curators would take issue, but also includes a lot of great ideas for using curatorial ideas to strengthen content strategy work[/ref]

Erin also includes examples of sites that take a curatorial approach to their content; the NYTimes.com Topics site section, the Times’ multimedia productions, and the New Museum’s online space, Rhizome, which preserves and displays digital works are especially relevant. I would argue that in addition to relying on the usual information management techniques handed down by librarians, any organization with more than a few hundred pieces of content can also benefit from a curatorial approach to information collection, contextualization, and display.

Which isn’t to say that a retail display = curation. In the comments that follow Erin’s ALA article, Margot Bloomstein reminds us that marketing people already have a word for the design of product displays—”merchandising”—and that when we’re discussing the “curation” of product-related content, it makes more sense to switch vocabularies (a distinction that may prevent us from going too far down the path of curated ladies’ underpants):

[I]t strikes me that when articles, news, and information are the main wares of a site, the content strategist can adopt the practices of a merchandiser as well. Retail merchandising brings together products to make new meaning through context. Put all the red items together in a window display, and voila! It’s time to shop for Valentine’s Day! Mix together pens, folders, and lunch sacks, and look! It’s time to go back to school! As content strategists, we may more easily communicate ROI for “merchandising” content, especially for retail clients . . .[ref]Comment: “Strategy Makes Meaning”; curating panties[/ref]

Museums and libraries are the physical manifestations of cultural impulses I treasure above nearly all else, but that’s not why I’ve been writing this series. One of the reasons I’ve been thinking so much about curation is because I’m working with Happy Cog Studios and Ralph Appelbaum Associates on the redesign of the US Holocaust Memorial Museum’s website. As my colleague Whitney Hess has written, this is, for many of us, the project of a lifetime.

Working with the Museum’s across-the-board brilliant staff[ref]seriously—I don’t know how you get that many brilliant, hyper-competent, funny badasses into a single building without sparking some kind of atomic event[/ref] has been an irreplaceable chance to understand how differently a single organization’s teams and divisions may approach its collections, all while maintaining a very consistent sense of responsibility toward the institution’s mission, audience, and purpose. As a result, I’ve been wrestling with the relationship of the content strategist to the collections of content within her care. In the next post in this series, I’ll touch on some of the principles and tools of traditional and digital curation that I’ve found most relevant to my work as a content strategist.

7 thoughts on “The Curate and the Curator”